– Toward the end of last year, the foundation Anna´s Tuin and Ruigte, which runs the community garden in Science Park, dedicated the area behind the Snackwagen to AUC students. The idea was to initiate collaborative work between AUC students and Anna´s Tuin, giving students the chance to bring life to their own gardening and art projects. Now, around five months later, the AUC and Anna´s Tuin Entrance Project is up and running.

The project is run by Rita Hansl, a second-year Science major at AUC and the current chair of Pangea, AUC’s sustainability committee. Hansl made the project her internship and is responsible for the development and planning of the garden. On her project timeline, students can read about her plans to construct pallet furniture, build a playground, and create a barefoot path as well as a sensory garden.

“I really fell in love with the idea of having this part to be a garden for AUC, the idea behind it that people get involved and take some ownership of what is here,” says Hansl. The aim of the project  was to create a space that AUC students can make their own, either through their projects or by simply visiting the garden to take a break from studying. According to Hansl gardening might help community building at AUC, as well as possibly improve mental health. She also hopes that students will have the chance to learn about sustainable gardening, and to appreciate the outdoors more.

Even though the idea for the project was  conceived in November last year, due to time constraints and seasonal conditions for planting, Hansl only started conceptualising her project at the beginning of March.  The first working day was on March 31 and the project ends on May 26.

Hansl is not the only AUC student involved with Anna´s Tuin en Ruigte. Seska Trip, a second-year Social Science major, is fulfilling her community project requirement at the garden. Since February Trip has been responsible for a newsletter about the garden and organizing events in Anna´s Tuin, as well as initiating contact between Anna´s Tuin and schools for educational collaborations. On Sundays, Trip participates in gardening with the management team of Anna´s Tuin en Ruigte and other volunteers.

Anna´s Tuin en Ruigte is not just a community garden, it is also a place where the young and old can learn about the principles of permaculture, experience and experiment with nature. The aim of permaculture is to imitate natural ecosystems in order to create sustainable and self-sufficient gardens, and to reduce soil pollution. Anna´s Tuin offers free or low-cost workshops in permaculture on Thursdays from  17:00 to 6:30 pm 18:30.Visitors can also participate in gardening on Wednesdays from 10:00 to 12:00 and on Sundays from 13:00  to 17:00. The harvest of the vegetable garden gets divided equally between workers at the end of a working day.

Despite all the activities it offers, Anna´s Tuin remains unknown to many students and residents in the neighbourhood. The biggest challenge is the current lack of volunteers. “Some people say they find [the garden] a bit scary because it is so hidden,” says Joris Buis, chair of Anna´s Tuin en Ruigte.

Trip speculates that some people might mistake the community garden for a private city garden and dare not walk in. According to Hansl many AUC students she talked to seemed interested, but end up not joining due to lack of time. 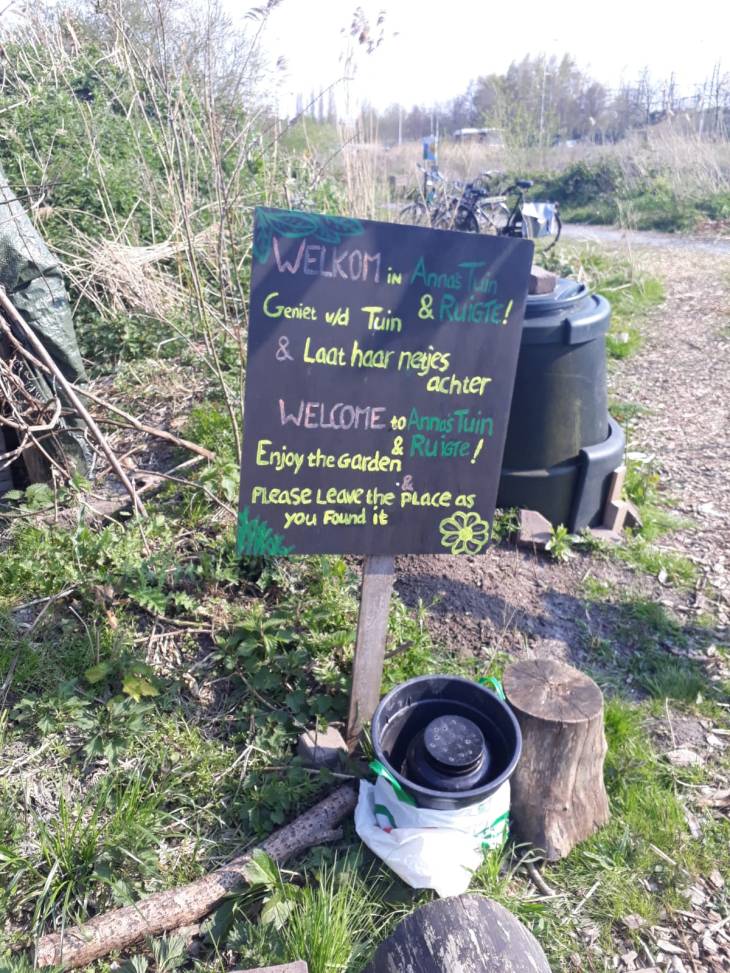 Hansl and Trip hope more AUC students will join the project and help create a green space for AUC and the Science Park community. Both will go abroad after the summer and new community project opportunities will open up for AUC students. However, Hansl´s and Trip´s work is not over yet, and there are still some events to come. Anna´s Tuin Spring Festival will take place this Sunday, May 19. It will be a day of gardening, pizza baking, and jamming around the fire in collaboration with OnStage, AUC´s performing arts committee. On May 26, an inauguration party will give students the chance to get officially introduced to the AUC garden.