The name of the event, “The Fifth Dimension”, expressed not only that the event was held for the fifth time, but also summarised the theme of the night- the unexplored and scientifically undefined. During the four hours long event, the eight speakers present brought their audience a little closer to finding an explanation of this dimension. 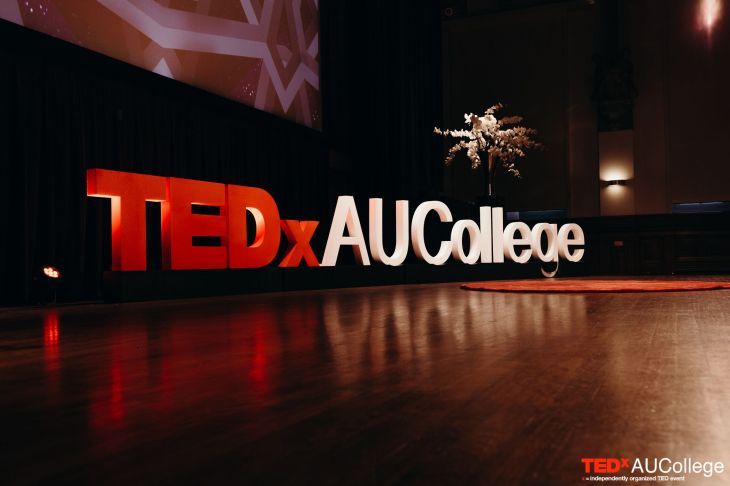 Mark van der Heijden, the first speaker of the night, goes under the nickname “The Backpacker Intern”- he explored 27 different countries, on seven continents, working at 32 companies. After working in advertisement for seven years, van der Heijden decided to exchange his house for a backpack and to travel the world. During his journey, van der Heijden ran out of money twice and had to ask his parents for financial support. Based on his own experiences, van der Heijden created the social platform “Wanderbrief”, that is meant to ignite people’s creativity and to facilitate the “Digital Nomad” lifestyle. A Digital Nomad is someone, who relies on the internet to become location independent, and moves between cities and countries while working remotely. Veerle Fanoy, a second-year Social Science major, said: “It just seems so easy to be broke and start the Nomad Life, with your parents financials at your disposal”.

Ella Maclaughlin, a second-year Social Science major at AUC, was chosen during Pitch Night, an event set up for AUC and non-AUC speakers to attempt to convince the audience and jury that they deserve to win a spot as one of the speakers for the night during the actual TEDxAUCollege event. During her travels in Turkey, where she lived with a Turkish family for a month, she had to avoid political conversations at all costs. Her story was inspired by her host father, who worked on the police force, and in every room of the house had a picture of a Wolf howling at three moons- the symbol of an ultranationalist party. During her story-like talk, Maclaughlin emphasised that one person can hold a diverse set of beliefs. After a few weeks, her perception of him changed, due to the way he cared for his family, and how he brought her tea every day when she was sick. She recognised a different side of him, other than standing for a particular party she did not agree with. Josephine Geurts, a second-year Social Science major, said: “I particularly liked the parallel she drew between the extreme right-wing beliefs in Turkey and the United States, such as Trump supporters”. Maclaughlin ended her talk with the idea that behind every story and dangerous beliefs, hides a human.

Mick ter Reehorst finds Europe sexy or at least wants to make it sexy again. He is an AUC alumnus and the founder of “Are We Europe” – a non-profit media collective, and a platform for young creative individuals to sketch the Europe they live in. “‘Are We Europe’ needs to become ‘We Are Europe’”, said ter Reehorst, and challenged the meaning of “Europe”, by pointing out that there is either anti or Pro-Europe and nothing in between. Valentine Chauchereau, a second-year Social Science student, said: “Being a French citizen and often confronted with Marine Le Pen’s nationalistic influence, ter Reehorst’s explanation about the need to build a unifying European cultural identity is essential to a certain extent”. 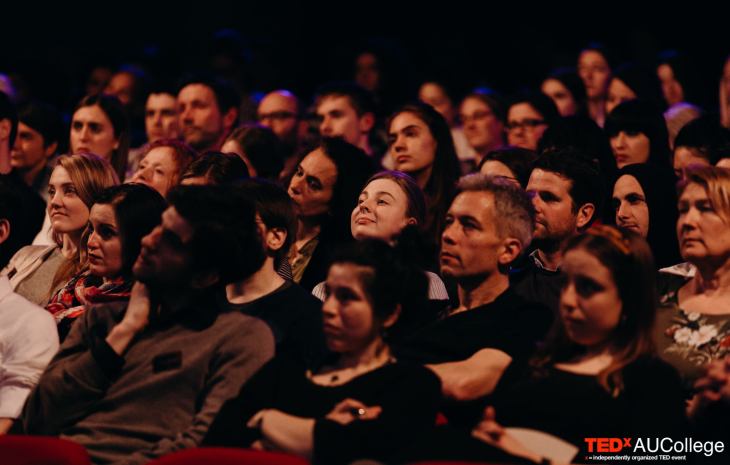 Patricia Kaersenhout thematised the invisibility of minorities within Western society, based on her own experience of being of Surinamese descent and growing up in the Netherlands. She uses art, to express her political opinions in relation to feminism, sexuality, racism and the history of slavery. Shannen Chin, a third-year Social Science major at AUC, said: “ I felt that her talk was too unstructured to captivate the audience and to clarify her topic”. Louise ten Bosch, third-year Social Science major at AUC, said: “I was impressed that she used her art, to illustrate her story and concept”.

Throughout the event, musical performances served as breaks between each talk. Even though the night’s host Reinier Demeijer seemed a little nervous at times, the event was well organised, and the TEDxAUCollege team seemed satisfied. Christine van der Horst, chair of the TEDxAUCollege board, said: “I am really proud of the event being a reflection of our hard work of the last couple of months, and that the event did justice to it”.

Do you want to write for The Herring?

It’s your lucky day – The Herring is currently recruiting! Find out more here.