– Once evening rolls around in Science Park, the sidewalk on Carolina MacGillavrylaan invariably gets filled with the blissful aroma of herbs and melted cheese. Flocks of students joyfully strut to the dorms holding white carton boxes, all the while trying to wolf down another piece of SPAR’s signature frozen pizza.

It is hard to imagine a time when SPAR pizza was not available – or one when nobody cared about it. The warm, hearty treat has now become a staple in the lives of AUC students, landing itself a near-legendary status. It has truly become a meal for every occasion – Coralie Boon, second-year Humanities major, and Lela Roos, second-year Sciences major, say it is their exam season dinner of choice, whereas second-year Social Sciences majors Aisha Erenstein and Myriam Bellamine prefer to have it on their nights-in together.

Yet, it was less than five years ago that SPAR Science Park was not even around, as the store first opened its doors in November 2014. According to Jefke Olde Hauter, who has worked there since the beginning, the shop sold frozen pizzas from day one. The convenience dinner was not an immediate success, however, as hardly anyone bought it in those initial days. It took time – and a breakthrough idea from the store manager Vincent Leighton – to change that.

Leighton kept seeing Domino’s delivery scooters cruising along Carolina MacGillavrylaan and realized what a high demand there was for pizza in the neighborhood. He thought SPAR could offer a similar service, and went on to install the store’s first fast oven in 2015. Now, customers could have their pizza heated up in-store, having their dinner ready in less than three minutes.

Hauter says that initially, the staff had to actively encourage customers to use the new service, as very few people knew about it. Once its popularity picked up, however, and SPAR pizza became an overnight success. “It went a little bit like a wildfire,” Haute says about the experience. Leighton adds that the pizza sales numbers more than doubled that year. 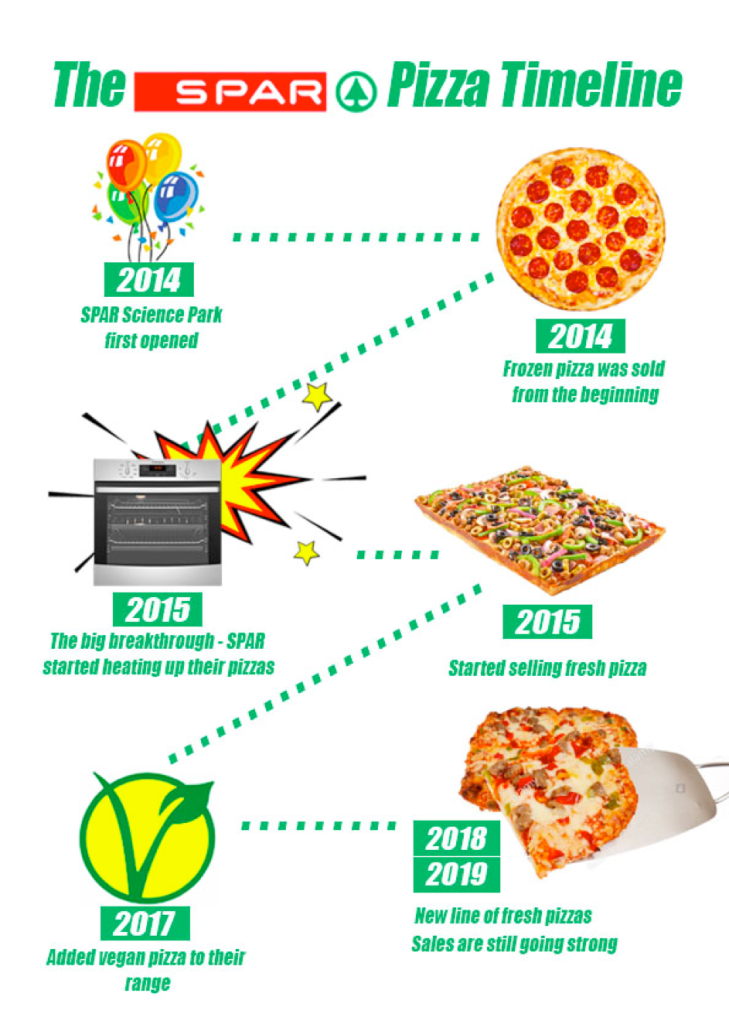 The heat-up service had taken frozen pizza from being yet another grocery item, and had turned it into a local fan favorite. SPAR Science Park kept this momentum going by adding a line of fresh (i.e. refrigerated) pizzas in 2015, and expanding their frozen pizza range to include vegan options in 2017. According to Haute, adding vegan pizza helped grow their customer pool, thus further increasing sales.

In 2018, the fresh pizza line was upgraded. New flavours, such as the best-selling ‘spicy chicken’, were added, and the original round, cheese-laden variations were replaced by ones that were rectangular, and notably less cheesy. “Now the dough is nicer,” Hauter says about it.

According to Egle Budreviciute, third-year Humanities major, these changes were desperately needed. Speaking of the old version of the fresh pizzas, she says, “The SPAR-SPAR pizzas, the ones they make themselves, I don’t like, because they have a h*ll of a lot of cheese on them and the dough isn’t too nice.” Budreviciute has not tried the upgraded version, since she is a big fan of the frozen line, especially the mozzarella and the salami variations.

According to Hauter, the frozen line tends to be a crowd favourite due to its cheap price. Second-year Science major Sara Koopman agrees, saying that she only opts for the most budget-friendly pizza options at SPAR. Regardless, the manager Leighton says he focuses more on promoting the fresh range, and explains that while frozen pizza is available everywhere, the fresh line is exclusive only to SPAR.

His efforts seem to be paying off as – according to SPAR Netherlands spokesperson Xandra Eikemans – the Science Park store has become the chain’s nationwide champion in pizza sales (both frozen and fresh). Additionally, the store is one of only two SPAR locations in Amsterdam that offer a pizza heat-up service – the other one, SPAR Kinkerstraat, is also ran by Leighton. He says that he plans to introduce a new “flavour of the month” offer for the fresh range, in hopes of further boosting its popularity.

SPAR’s general sales took a hit in 2018, when a new Albert Heijn opened down the street, but their pizza sales numbers stayed afloat. According to Leighton, the store’s number of pizza purchases has continuously been rising since 2015, and is now higher than ever. Leighton and Hauter credit that mostly to the convenience of having your dinner ready within minutes, and they seem to be on the right track. While some of the students interviewed for this article said the taste of SPAR pizza is not too good, all of them agreed that the best thing about it is how quick and easy it is to get.

Editor’s note: This news story is part of a collaboration between The Herring and AUC’s journalism course. The story was entirely reported, written, edited, and fact checked by members of the journalism course. Some material may have been altered by The Herring’s editors to fit its style guidelines.

Correction: In an earlier version of this article, the name of the store manager of SPAR, Vincent Leighton, was misspelled.