— Could you imagine living in an Amsterdam that is even more rainy? On Thursday, April 12, a group of Amsterdam University College (AUC) students will premier their musical “Circus of the Rain”, which will give a glimpse of what living with the consequences of climate change might look like.

The play revolves around a group of circus performers and is staged in a post-apocalyptic Amsterdam, where climate change has taken its toll. “The group fights to keep living a normal life and of course it gets a lot more complicated from that point on”, says Pieter Buis, a third-year Humanities major, and the composer, writer, and director of the musical. 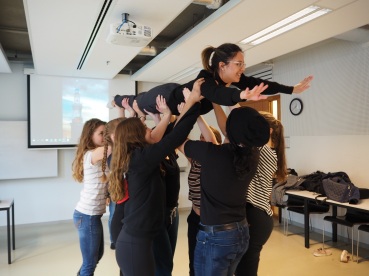 Buis, who has already produced several other musicals during his time at AUC, came up with the concept for “Circus of the Rain” in April 2017. “I pitched the idea and said it was going to be a musical with no dialogue”, he says. The task at hand represented a challenge at first, but Buis eventually taught himself how to write music, and, apart from a few pieces, ended up creating the whole musical by himself.

Even though “Circus of the Rain” is his vision, Buis involved all team members into the development of the play. “After you’ve written a musical, a whole layer of interpretation needs to happen”, says Buis. “This is really important for the actors, to identify with their characters, and to feel that they are creating and not just recreating”, he adds. Hero Scott, a third-year Humanities Major who enacts Marta, a singer in the circus, experienced the fact that she was able to co-create her character as extremely rewarding. “I have changed words by accident and Pieter said ‘that’s because you are a native English speaker, so if you find that more comfortable to say, say it’”, she adds. According to Scott, the fact that she was constantly asked to reflect on her character’s motivation behind every action, made her feel especially involved. “Pieter wrote these characters and wanted us actors to ask ‘why would your character say that?’”.

Not only is the engagement of the actors with their characters, but more so the identification of the audience with them, a vital point for the message that “Circus of the Rain” is trying to convey. According to Buis, he was trying to distance himself from a rational approach to climate change, by asking “can I make climate change relatable to people on an emotional level?” Creating a time in which climate change has already done its damage, and showing how people live in such a world, provides Buis’ audience with a new view on the issue.

In comparison to his previous productions, Buis only involved a rather small team of 14 actors, seven band members and a few crew members. “It is miraculous that we were able to plan it this way. People were just getting really involved with it and were willing to put extra hours into the project”, he says. Although the team received support from AUC’s OnStage committee, a lot of work fell into the hands of the initial group. According to Buis, the fewer hands involved in the production turned out to have a productive effect on the work. “Like this we manage to keep track of everything”, he says.

Now that the premiere is moving closer, the pressure on the team increases one last time. Scott, who is also writing her Capstone this semester, admits that she could have found a more convenient time to star in a musical. The many hours of rehearsals, with the team and individually, have forced her to compromise on her  university work. Buis, who chose not to go on exchange during his time at AUC to work on his musical instead, is excited for the premiere. “I am really waiting for people to see the show and to experience the musical’s intimacy, and the story, and the surprises, and to see what they take from it”, he says.

“Circus of the Rain” will be performed from April 12 to 14, at the Oostblok Theater in Amsterdam Oost. As a preamble to the musical Scott says: “start feeling compassion, before it’s too late”.