–As of October 2016, the EU considers Afghanistan to be a safe country, and has signed an agreement with the Afghan government that allows for the deportation of 80.000 refugees back to their country of origin. This decision was met with international resentment, as UN statistics show that Afghanistan is the most dangerous country on earth after Syria, with around 8090 civilian casualties in 2017.

On Sunday, February 18, fifteen AUC students participated in the ‘Don’t Send Afghans Back’ demonstration, a Europe-wide protest against this deal. The students got involved in the protest because the Amnesty International Student Association (AISA), which has two third-year AUC students on this year’s board, was asked to promote the event.

When the students arrived on the Dam square at 2PM, they found a crowd huddled around a stage in front of the royal palace. As the start of the protest drew near, more and more people joined in, some of which carried large banners. Johan Fredsted, third-year Humanities major and public relations manager for AISA, said: “I was disappointed that not more Amnesty members attended, but I was very impressed with the total number of people that showed up.” At its peak, the demonstration consisted of around 250 protesters.

Nasiba Sharipova, chair of AISA and third-year Social Science major, was equally pleased that so many had made their way out into the cold to show support. She pointed out that protests like these create opportunities for refugees to meet people that can be of help to them. “There was a representative of an institute that provides legal aid to refugees, for example, and she invited all of them to come and talk to her,” said Sharipova. 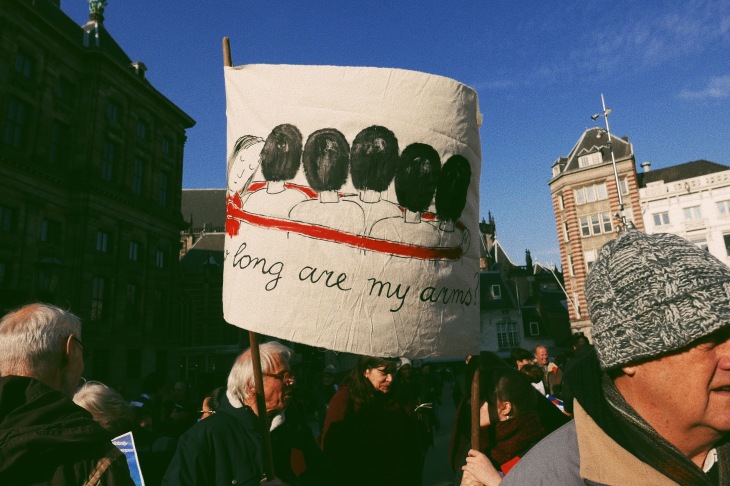 The protest started with two speeches. First Jael in ‘t Veld, a representative of ‘Dont Send Afgans Back’, took the stage. She explained that many of the refugees will face deadly circumstances in their home country, and that the UN deems Afghanistan the most dangerous country on earth after Syria. She then criticized the Dutch government for only giving a status to 35 percent of the refugees arriving in the Netherlands.

After Jael, an Afghan refugee spoke to the crowd to share his experiences living in the country. He again emphasized that Afghanistan is far from safe: “Life is different than Europeans can imagine,” he said. “In Afghanistan, your life can be ended any second. Sending refugees back is an injustice to those seeking a better life.” Addressing the EU directly, he asked: “Would your policies be the same, if it were your families on the run?”

At 3PM, the protesters began their march through the city center. 250 people advanced through Het Rokin to Rembrandtplein, holding up banners and shouting “No borders, no nations, stop deportations!”. The protesters walked on the open road, forcing traffic and trams to stop and wait before the procession had passed. As soon as the march entered the  narrow streets around Rembrandtplein, the sound of their voices was amplified, drawing people out of the surrounding buildings. Fredsted was satisfied with the attention that the protest received, especially from the many tourists filling the streets that day: “A lot of people were filming us. I was happy with the reach we had, how strong our voice was, and I think we made an impact on social media.”

At 4PM in the afternoon, the protest ended at Dam Square. Afterwards, some protesters stayed around to chat. Massoom Aryubi, Afghan refugee and former Right2Education student, said “I think the protest was a success and I hope that it will reach the ears of politicians.”

Fredsted said he experienced the protest as empowering and encouraging, but points out the duality in the experience: “Yes, you can have fun, of course. That is important. But knowing the people that march next to you might be sent back to the country they fled from – this feeling of them having escaped it, and then having to go back – that is the saddest part.”