— In times post-Facebook zenith, when Tindr and Grindr dominate the vast sea of dating facilitators diversifying our home screens, the notions of communication and connectivity gain an unsettling urgency. The affordance of the Internet and the dawn of the information age broke down the previously assumed black-and-white lines of what society presumed human interaction to be. Millennials, if not more so their preceding generations, find themselves in a new grey zone of personal identification shaped by endless possibilities more converged than ever. Nonetheless, increased choice often entails less decisiveness. So we all touch and swipe ourselves through the bright lights of our devices hoping to arrive at a destination we cannot quite grasp but are sure to recognise once we arrive. 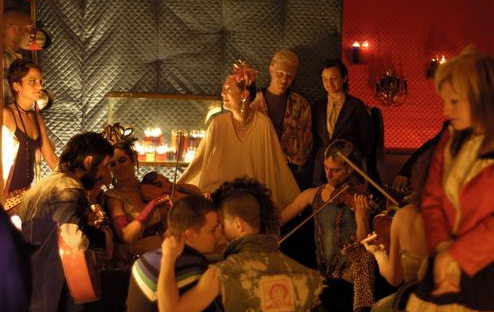 In early 2003 John C. Mitchell, a child of New York’s DUMBA movement and icon of post-millennial queer cinema, grasped that urgency and decided to give these lights, anxieties, and hopes a screen displaying a visual ejaculation of Millennial mind-set in his 2006 film Shortbus. And as graphic as the previous description is Mitchell’s allegorical employment of sex itself . While most at this point might expect such blatant exposure prone to but one end, it is precisely Mitchell’s decisive aim to disappoint said expectation that makes Shortbus such an outstanding achievement. The very first minutes, yes, even seconds guide the viewer through the protagonist’s flats and rooms as all of them engage in one form of sex or another, alone and together, straight and gay. Even though this might appear quite bipolar, the general atmosphere is open and welcoming. The explicit, non-simulated sex scenes one is exposed to promptly lose their erotic character after the first shock. The sex is honest, genuine, and relatable; a maxim followed throughout the film.

It is made clear from the start that any sex in this film is meant as a metaphor for something deeper, something personal within the characters themselves. On the DVD’s bonus interview (yea, they still exist, waiting to be rediscovered by hipsters) Mitchell says about his decision, “In the old days, […] you couldn’t show sex on film […] When you can show more realistic sex, the sex itself can be a metaphor for other parts of the character’s lives. The way people express themselves sexually can tell you a lot about who they are.” Thus, sex is but the healthy and natural, physical, visible manifestation of inner hopes, anxieties, aspirations, and thoughts. Sounds familiar? The young urban protagonists in Shortbus are indeed nothing else but us touching and swiping ourselves through the bright lights looking to connect, seeking to communicate.

Beyond the film’s open and natural feel for holistic human characters, it is the often symbolic and beautiful narrative and cinematography behind it, which contributes to the easy and well-delivered message. There are three main motives that are driving the film. For one, the previously discussed notion of connectivity, which really serves as the main incentive in the film. Secondly, urbanity; Shortbus is an intrinsically urban movement attracting precisely those individuals that have become a product of such a fast-pasted, open, and competitive environment. The inherent urban character of Shortbus provides for a binary sexual narrative that presents comfort and connectivity on the one hand, and sexual liberation and anonymity on the other. The many great names of New York’s queer underground movement playing themselves, characters, such as Mayor Tobias, referencing to NYC personalities, and the many other references to the city itself make this aspect of the narrative an engaging nuance for many urban Millennials. The most apparent cinematographic aspect of the film is certainly the use of light. It expresses the different stages of progress in the pursuit for connectivity. As not to spoil the fun for those who have not seen this masterpiece yet, it should still be advised to watch the lights, their behaviours and media carefully. Often they indicate the communal stage of development the characters have reached. 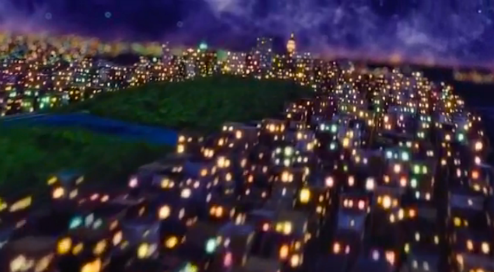 Equally apparent and impressive are John Bair’s computer-generated cityscapes in the film. Many scholars, who analysed the film, including myself, have argued that it supports another,final feature. Throughout the characters are given full ownership and agency of their personal and sexual narratives regardless of sex, gender, sexuality, ethnicity, or any other form of distinction. There is no judgement, discrimination, or violation of human dignity displayed within the world of Shortbus. All these natural and healthy characteristics of human beings are considered as such, which as many know is far from the case in most of the real world. The world of Shortbus is argued to be utopian and idealised. It is a world where women and LGBTQI people are not being violated in their basic human rights. The notion of human respect being normality is so subtly portrayed in the film, that, besides all the issues addressed, it maintains a peaceful, welcoming and open atmosphere.

When the viewer first enters the actual Shortbus venue in the film, he is welcomed by the host, Justin Vivian Bond, a character as flamboyant as the film itself, with the words, “It’s a salon for the gifted and challenged.” In a sense, Mitchell clearly indicates those the film is for, and those the film is by. The beauty of Shortbus is that it does not matter if many like it, it matters that it communicates to the right people. Especially, at AUC, which, regardless all arguments, is a very progressive and open place, Shortbus has a particular appeal to many of us. No matter where on or outside the spectrums of sex, gender, or sexuality we find ourselves, we all believe in a common factor that binds us. It is that belief that makes Shortbus relevant in our AUC lives. To end with the final words of the final song of the film, “we all get it in the end.”