– On Friday night, March 29, 2019, Joshua Harry van der Kroft Glanzberg passed away at the age of 24, following an accident at the metro station near his home in Amsterdam. Josh was a beloved son, brother, grandson, nephew and cousin, and a friend of many alumni and students of Amsterdam University College, from which he graduated in 2017.

Josh was born on December 9, 1994, in Frankfurt am Main, Germany, to mother Susan Glanzberg and father Lukas van der Kroft. He first moved to Amsterdam, from New Jersey, United States of America, in 2013 to study economics at the University of Amsterdam. A year later he enrolled at AUC.

In 2017, Josh was interviewed for the section “Meet the students” on AUC’s website. He then said that he had found a home away from home in Amsterdam, and at AUC. For once his education did not make him feel simply talked-at, but gave him the chance to interact with his professors. Outside the classroom, Josh was also an active member of the community. He was secretary and later chair of Junket, AUC’s trips and excursions committee, and chair of Amsterdam International Model United Nations, AIMUN. After finishing his studies at AUC, Josh went on to do a Masters in International Trade and Investment Law at the University of Amsterdam, which he completed in January 2019.

Josh was a bonvivant – he knew how to live, and live well. He loved to travel to exciting places, cook wonderful meals and enjoy them with great company. As one might expect from a chair of AIMUN, Josh had a strong interest in politics and was a sharp tongued contender in debates.

A few of the things which were striking about Josh was his dazzling smile, generous warmth and cheeky humour – which his yearbook entry from 2017 offers a glimpse of. 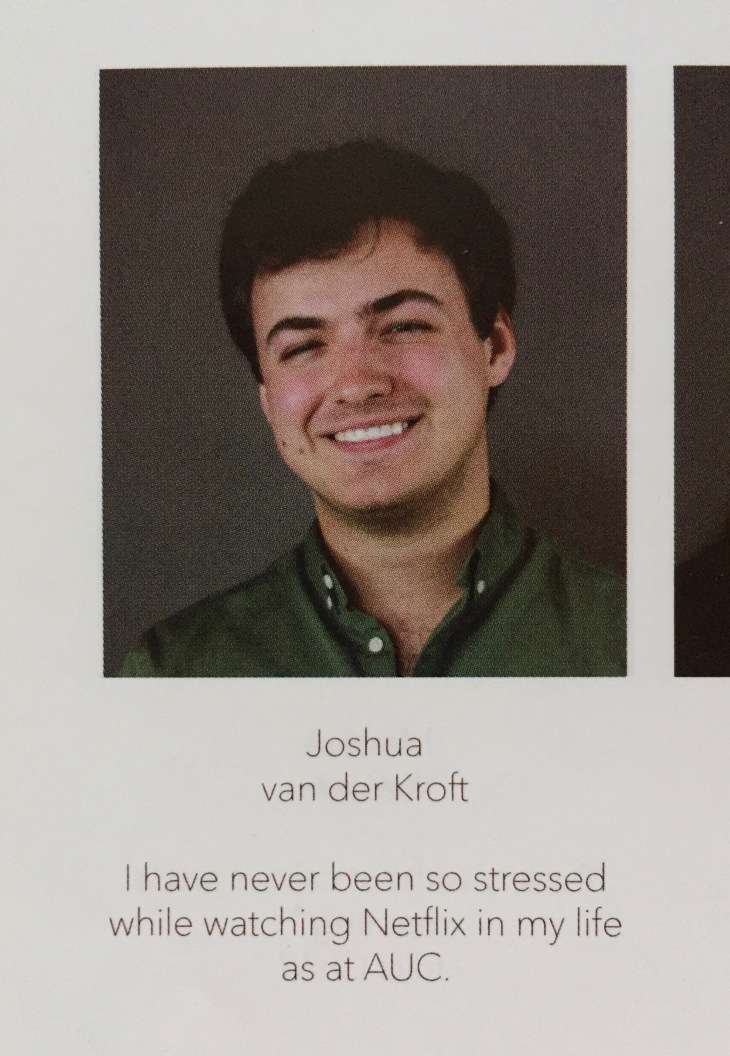 Josh leaves behind his mother and father, his sister Isabel, his girlfriend Maxje, as well as a big family of aunts, uncles and cousins both in The Netherlands and the USA. A memorial service, open to anyone who feels close to Josh, will be held in the Uilenburger Synagogue in Amsterdam this evening, April 3, at 19:30.

On Friday, April 5, a funeral ceremony will take place in Bernheim-Apter-Kreitzman Suburban Funeral Chapel in New Jersey, at 09:30. Beginning Saturday, April 6, shiva – the week-long mourning period in Judaism – will be observed at Josh’s mother’s home. Donations can be made in memory of Josh to the AUC Solidarity Fund and/or Lustgarten Foundation for Pancreatic Cancer Research.

Editor’s note: A special thank you to Josh’s father and sister for their help in completing this obituary.

Correction: An earlier version of this article did not contain complete details on the funeral in the USA and the family’s preferred charities for donation.

Correction: This article originally referred to the section “Meet the students” on AUC’s website as though it still displayed info about Josh as one of AUC’s students/alumni. Said info has since been removed by the management of AUC, out of respect for Josh, and this article has been rephrased accordingly.

Correction: An earlier version of this article failed to mention that Josh was not only secretary for Junket, but also later chair – he was part of the committee for two years.